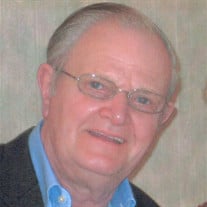 Edward J Hascup, Jr., 76, of Richmond, IL, formerly of New Jersey, passed away Sunday, May 11, 2014 at Centegra McHenry Hospital, McHenry, IL. Edward was born in Patterson, New Jersey on December 6, 1937, a son of the late Edward and Mabel (Hammett) Hascup Sr. He was married to Louise Meyer on August 20, 1960 in Ridgewood, N.J. He was employed as a postmaster for the U. S. Government for thirty years, then was a lab technician for Lenscrafters for 15 years. He served in the U.S. Army as a SP 4 in the Korean War from July 1956 to July 1958. Edward is survived by his wife Louise; a daughter, Arlene (Donald) Stupienski, of Richmond, IL; two sons Edward (Marjorie) Hascup of Johnsburg, IL; Brian (Lisa) Hascup, of Allendale, N.J.; 10 grandchildren; a sister, Betty (William) Mabey, of Montville, N.J., a brother, Henry (Joyce) Hascup, of Lodi, N.J. He was preceded by a sister Mabel Kohan. Funeral services will be held in New Jersey with interment with mililary honors in George Washington Memorial Park Cemetery in Paramus, N.J. For information, please call 815 678-7311 or visit www.ehornadams.com.

The family of Edward J. Hascup Jr. created this Life Tributes page to make it easy to share your memories.

Send flowers to the Hascup family.