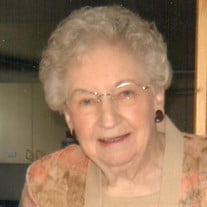 Doris M. Speaker, 84, of Richmond, IL, passed away Tuesday, January 6, 2015 at JourneyCare Health Center, Woodstock, IL. She was born in Wilmot, WI on July 22, 1930, a daughter of the late Cyril and Elsie (Ehlert) Pacey. Following graduation from Wilmot High School in 1947, she worked at the Snow White Ice Cream parlor in Twin Lakes. In 1950, Doris started working at Anderson's Candy Shop in Richmond, IL. After a few years off to raise her children, she resumed working at Anderson's and continued to do so until her retirement, after 40 years, in December 2004. She was married to Wion "Bob" Speaker on Oct. 20, 1950 in Salem, WI and he died Oct. 15, 1993. Doris was a member of the Community Church of Richmond, joining in 1956. She served as the church's Financial Secretary for many years. She was active in the Women's Fellowship and coordinated kitchen activities for various events. She was the chairperson of the Memorials and Gifts committee and was active in the Knit Together group. She participated for many years in major church fundraising events such as the Trail of History and the annual Beef Roast. Doris enjoyed working about her home, keeping herself busy with numerous tasks. She loved feeding and watching birds that gathered in her backyard. Knitting was a favorite cold weather activity while warm weather was spent tending to her flowers and container garden. Handwritten letters to keep in touch with family and friends was a year-round activity. Doris' favorite hobby was cooking and baking. Many people will have fond memories of her pickled beets, "icebox" pickles, homemade strawberry jam, Chex mix, homemade pies and cookies and delicious holiday dinners. She was the unofficial social chairperson for her many friends from the church and community. Activites included trips to fish fries, to Opera House shows, to gatherings for cards/games, to New Years' Eve dinners and to summer outdoor music concerts. Doris is survived by a daughter, Elaine (Ed) Meers, of Stewardson, IL; a son, Jim (Kathleen) Speaker, of Richmond, IL; five grandchildren David Meers of Chicago, Mike (Ashley) Meers of Effingham, IL, Sharon Speaker of New York, NY, Tanja Speaker of Crestview Hills, KY and Michelle (Andrew) Currier of Woodstock, IL; a sister, Susan McRae, of Twin Lakes, WI and a brother, Leland "Rip" Pacey, of Wilmot, WI. She was preceded by a grandson Scott Meers, two sisters Joan Stoxen and Charlotte Haase and a brother Harold "Stub" Pacey. Visitation will be from 2 to 6 p.m. Sunday Jan. 11, 2015 at Ehorn-Adams Funeral Home 10011 Main St. Richmond, IL. Funeral service will be at 10:30 am Monday Jan. 12, 2015 at the Community Church of Richmond, 5714 Broadway, Richmond, IL. Rev. Hope Molozaiy will officiate. Interment will be in Richmond Cemetery in Richmond, IL. In lieu of flowers, memorial contributions may be made to Community Church of Richmond Memorial Fund 5714 Broadway Richmond, IL 60071.

The family of Doris M. Speaker created this Life Tributes page to make it easy to share your memories.

Send flowers to the Speaker family.