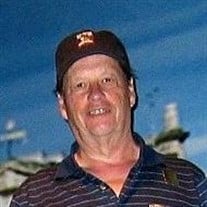 Donald J. Grons, 77, of Spring Grove, IL passed away Thursday, January 9, 2020 at Northwestern McHenry Hospital, McHenry, IL. Donald was born in Chicago, IL on June 16, 1942, a son of the late Josephine (Ratkowski) and Bruno Grons. He was married to Kathryn Stuemke on October 28, 1967, in Skokie, IL. A graduate of John Carroll University with a bachelor of arts in business administration, he became a consultant for Oracle. He was a member of APICS (American Production and Inventory Control Society) for many years. He served as an officer in the U.S. Army from 1964 to 1969, stationed in Verdun, France for two years. He was a member of St. Joseph Catholic in Richmond, IL and a former member of St. John the Baptist in Johnsburg, IL. He was a member of the Johnsburg Community Club for several years, a Board member of The Preserve HOA, a Little League Baseball Coach and an avid Cubs fan. He loved playing golf, his model trains, and especially loved spending time with his four grandchildren. Donald is survived by his wife Kathryn "Kathy"; two sons Donald C. (Shelli) Grons, of Spring Grove, IL; Bill, (Kristin) Grons, of Johnsburg, IL; four grandchildren Paige, Jordan, Davis and Nicholas and a sister, Audrey, (Keith) Scheele, of Sun City, AZ. Visitation will be from 4 to 8 p.m. Tuesday Jan. 14th at Ehorn-Adams Funeral Hoe 10011 Main St, Richmond. Mass of Resurrection will be at 10:30 a.m. Wednesday Jan. 15th at St. Joseph Catholic Church 10519 Main St, Richmond with Msgr. Martin Heinz officiating. Interment will be in St. Joseph Cemetery. In lieu of flowers, memorial contributions to St. Joseph Catholic Church Building Fund 10519 Main St. Richmond, IL 60071.

The family of Donald J. Grons created this Life Tributes page to make it easy to share your memories.

Send flowers to the Grons family.