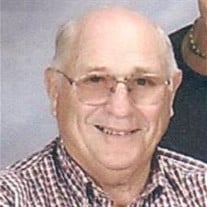 Delmer "Del" Olsen, age 84, of Elkhorn, WI, formerly of Richmond, IL, passed away Saturday, April 27, 2019 while in the company of family members, at Aurora Lakeland Medical Center in Elkhorn, WI. He was born in Ringwood, IL on September 28, 1934, a son of the late Elmer and Emily (Beatty) Olsen where he lived until moving to the family farm in 1942, joining with his brother as C & D Olsen's Family Farm and expanded to one of the larger dairy farms in the area, A lifetime dairy farmer in Richmond, he was a member of McHenry County Farm Bureau and was elected to the Genoa City CO-OP's board of directors. (Wisconsin Dairies), eventually retiring in 2009. They moved to Elkhorn after selling the farm in 2016. Del and Donna began spending their summers in Tomahawk, WI where they enjoyed fishing and the outdoors. He attended Montelona grade school and graduated from Richmond-Burton High School in 1952. He then attended Bradley University. He served in the U.S. Army from 1957 to 1959, being stationed in Germany. He also served as a Richmond Township Trustee for 25 years. He was married to Donna Zarnstorff on May 28, 1960, in Lake Geneva, WI and was a faithful member of First Evangelical Lutheran Church Lake Geneva, WI. Together they enjoyed traveling and had visited all but two states and had visited 12 foreign countries. Del is survived by his wife Donna; a son, Ron Olsen, of Belvidere, IL; Kristina Olsen, the mother of his children Kristina, Anthony (Valerie), Emily and Sebastian; a great granddaughter Charlotte; two cousins Robert (Susan) Lowe of McHenry and George York of Sharon, WI, sister-in-law Judy Gifford, brother-in-law Stan Hilgendorf, several nieces and nephews. He was preceded by a brother Charles. Visitation will be from 4:00 to 8:00 p.m. Wednesday May 1, 2019 at Ehorn-Adams Funeral Home 10011 Main St, Richmond. Funeral services will be at First Evangelical Lutheran Church, 1101 Logan St, Lake Geneva, at 11:00 a.m. Thursday, with Rev. Karl Schultz officiating. Interment will be in Greenwood Cemetery in Greenwood, IL. In lieu of flowers, memorial contributions to First Evangelical Lutheran Church 53147. For info, please call 815 678-7311 or visit www.ehornadams.com.

Delmer "Del" Olsen, age 84, of Elkhorn, WI, formerly of Richmond, IL, passed away Saturday, April 27, 2019 while in the company of family members, at Aurora Lakeland Medical Center in Elkhorn, WI. He was born in Ringwood, IL on September 28,... View Obituary & Service Information

The family of Del Olsen created this Life Tributes page to make it easy to share your memories.

Send flowers to the Olsen family.