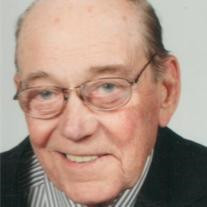 Hebron, IL Darrell "Sam" Samuelson Darrell "Sam" Samuelson, 82, of Hebron, IL, passed away Tuesday, September 4, 2012 while in the company of family members, at his residence. Darrell was born in Iroquois, South Dakota on December 11, 1929, a son of the late Melvin and Lauretta (Schumaker) Samuelson. He was a graduate of Capron High School in1947. He was married to Margaret Ackerman on July 11, 1953 in Belvidere, IL. He worked as a carpenter for Builders Unlimited of Richmond, IL for 45 years retiring in 2008. He was a former member of Harvard Moose Lodge #1329, a former member of Richmond Lions Club and an avid bowler for many years. He served in the U.S. Air Force as a Staff Sergeant during the Korean War from March 1949 to Nov 1952. He was a member of Eugene Drill Post #606 of Hebron. Darrell is survived by his wife Margaret; two daughters, Vanessa, (Thomas) Tyska, of Sharon, WI; Susan Hoy(Lee Hucksteadt) of Woodstock, IL; two sons Dale Samuelson Sr, of Springfield, WI and Stephen Samuelson, of Hebron, IL; 11 grandchildren, 22 great grandchildren and three great great grandchildren and a sister, Karen Kremsreiter, of Columbus, MO. He was preceded by his parents. Visitaiton will be from 4 to 8 pm Friday at Ehorn-Adams Funeral Home 9625 Main St. Hebron, IL. Funeral service will be at 10 am Saturday Sept. 8, 2012 at Ehorn-Adams Funeral Home, Hebron, IL. Rev. Matt Nevala will officiate. Interment will be in McHenry County Memorial Park Cemetery in Woodstock, IL. In lieu of flowers, memorial contributions may be made to American Cancer Society 143 First St. Batavia, IL 60510. For info please call 815 648-2054 or visit www.ehornadams.com

The family of Darrell "Sam" Samuelson created this Life Tributes page to make it easy to share your memories.

Send flowers to the Samuelson family.