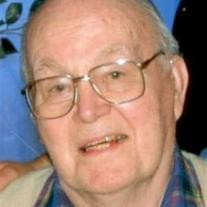 Clinton E. "Clint" Bell, 91, formerly of Richmond, died Friday, September 2, 2011 peacefully at Burr Oak Manor in Genoa City, WI Clinton was born in rural Richmond Township, on October 19, 1919, the son of the late Arthur and Ethel (Elfers) Bell. He was a graduate of Richmond High School in 1937, competing in baseball, basketball and boxing. After high school, Clint played baseball for a St. Louis farm club in Springfield, MO. He was married to Ruth Speaker on Oct. 20 1940 in Crystal Lake, and she died May 15, 1990. His hobbies included ballroom dancing, music and traveling. He served in the U.S. Army as a PFC in WW II, serving in the 3rd, 70th and 78th infantry divisions in the European Theater from 1943 to 1945. Clint attended night school at a manufacturer of office machines for his training under the GI Bill of Rights. He then worked for Abbott Laboratories, North Chicago in the Corporate Engineering department, specializing in office equipment maintenance, retiring in 1984. He attended the Community Church of Richmond. He served as president of the Richmond Township Cemeteries from 1996 to 2003. He was a bus driver for Richmond-Burton Community High School for many years. He served the Village of Richmond as a member of the board of trustees under eight different village presidents from 1959 until the mid 1980's. Clinton is survived by a daughter, Judy Hansen; two grandsons Scott and Michael Hansen; two sisters-in-law Marie Bell and Doris Speaker; nieces and nephews Debbie Weis, Lori Degen, Don and Harvey Bell, Kendall Smith, Elaine Meers and Jim Speaker. He was preceded by a brother George Bell, a sister-in-law Lucille Smith and a brother-in-law Wion "Bob" Speaker. Visitation will be from 10:30 am Tuesday September 6, 2011 until the funeral service at 11:30 am at Ehorn-Adams Funeral Home 10011 Main St. Richmond with Rev. Hope Molozaiy officiating. Interment will be in Richmond Cemetery in Richmond. Family request donations to Community Church of Richmond PO Box 246 Richmond, IL 60071 or VNA Hospice 500 Interchange Lake Geneva, WI 53147.

The family of Clinton "Clint" Bell created this Life Tributes page to make it easy to share your memories.

Send flowers to the Bell family.