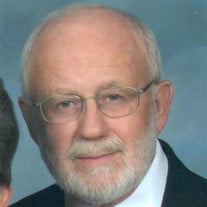 Charles John “Jack” Wightman, 84, of Hebron, lost his courageous battle to cancer on April 15, 2018 He died at home surrounded by those he loved. He was born August 17, 1933, in Waukegan, Illinois, to the late Charles and Mildred (Riddell) Wightman. He married Patricia Dixon on August 5, 1961 at St. Patrick Church, McHenry. Jack graduated from Northern Illinois University, where he played tenor sax in the NIU jazz band and later formed the Jack Wightman Orchestra. After 38 years in public education, both as teacher and administrator at Harrison, Alden-Hebron, Newport, and Zion, Jack became an Illinois/Wisconsin Real Estate Broker. He was president of the McHenry County Board of Realtors in 1993. He was a member and past president of the Richmond Rotary Club for 20 years, as well as a member of the McHenry County Sportsmen’s Association, and the Illinois State Rifle Association. He was an active member of St. Joseph Church, Richmond, where he was a charter member of the Knights of Columbus, Finance Council Committee member, and Marriage Enrichment and Family Life coordinator. Jack is survived by his loving wife of 56 years, Patricia; Children: Patti (Wayne) Peisert, Craig (Tina) Wightman, John Wightman, Charlie (Jodi) Wightman, Donald (Linda) Wightman; grandchildren: Wyatt and Emitt Peisert, Paige, Rylee (Kyle) Chriske, Jackson and Sawyer Wightman, Brittany (Ryan) Vos and C.J. Wightman, Colton Wightman, Amber (Adrian) Matthews, Ted, and Cody Wightman; and a great grandson Wesley Chriske. He was preceded in death by his parents and his sister, Sharon and her husband Dudley McClain, and granddaughter Cassondra Wightman. Jack’s great enjoyment was spending time with his family “Up North” in Wisconsin. An avid hunter, he enjoyed hunting with his sons and grandsons. Along with his wife Patricia, he has instilled a strong faith, solid work ethic, and an unbreakable bond of family in his children and grandchildren. He will be dearly missed by those who loved him! Visitation will be 4:00 to 8:00 pm Thursday, April 19, 2018 at Ehorn-Adams Funeral Home, 10011 Main Street, Richmond, Illinois. Funeral mass will be held at 10:30 a.m. Friday April 20, 1018 at St. Joseph Catholic Church, 10519 Main St, Richmond. In lieu of flowers, memorial gifts in Jack’s name may be made to St. Joseph Catholic Church, 10519 Main Street, Richmond, Illinois, 60071, or St. Jude Children’s Research Hospital, P.O. Box 50, Memphis TN, 38101-9929.

The family of Charles "Jack" Wightman created this Life Tributes page to make it easy to share your memories.

Send flowers to the Wightman family.