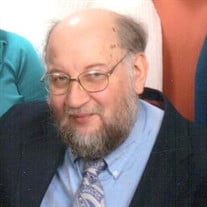 Richmond, IL Charles W. "Chuck" Schultz, Jr Charles W. "Chuck" Schultz, Jr, age 57, of Richmond, IL, passed away Thursday, February 26, 2015 following an auto accident in Ringwood, IL. He was born May 6, 1957 in Waukegan, IL, the son of Charles and Mary (Panek) Schultz Sr. He was a graduate of Richmond-Burton High School in 1975. He worked as a mechanic for Richmond Township Road District for over 12 years. He was a member of St. Joseph Catholic Church in Richmond. Chuck served as a trustee for the Village of Richmond from 2003 to 2007. He was a volunteer for McHenry County Conservation. He was a cub scout and boy scout, a model train and airplane enthusiast, was a creative woodworker, enjoyed antiquing and was an avid game player. He also enjoyed blue grass music and singing. Charles is survived by his mother Mary Schultz of Richmond; a sister, Karen (Carl) Jensen, of Racine, WI; a brother, Michael (Danielle) Schultz, of Woodstock, IL; three nieces Katie (Zachary) Henkel of Madison, WI, Carrie Jensen of Racine, WI and Christie (Thomas) Stephens of Austin, TX and two great nephews Nathan Henkel and Elliot Stephens. He was preceded by his father Charles W. Schultz Sr. Visitation will be from 4 to 8 p.m. Monday at Ehorn-Adams Funeral Home 10011 Main St, Richmond Mass of Resurrection will be at 10:30 a.m. on Tuesday, March 3, 2015 at St. Joseph Catholic Church,10519 Main St, Richmond, IL, with Msgr. Martin Heinz as celebrant. Inurnment will be in St. Joseph Cemetery Richmond, IL on Sunday August 2, 2015 at 12:00 p.m. In lieu of flowers, Masses would be appreciated or donation to the charity of one's choice. For information, please call 815 678-7311 or visit www.ehornadams.com..

The family of Charles W. Schultz Jr created this Life Tributes page to make it easy to share your memories.

Send flowers to the Schultz family.