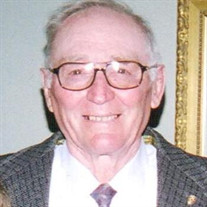 Charles S. Olsen, 86, of Richmond, IL, passed away Monday, July 13, 2015 at St. Luke's Medical Center, Milwaukee, WI. Charles was born in Ringwood, IL on July 6, 1929, a son of the late Elmer and Emily (Beatty) Olsen. He was a graduate of Richmond High School in 1947 graduating 4th in his class. He was a member of the National Honor Society. He was married to Mildred "Millie" Howe on October 19, 1958 in Redwood Falls, MN and she preceded him on March 15, 2004. He was a dairy farmer. He farmed with his dad for several years then farmed in partnership with his brother for many years, retiring in 2009. He was a member of Ringwood United Methodist Church in Ringwood, IL. He was a trustee of the church and served on various committees. Charles was a member and served as past president of McHenry County Farm Bureau from 1989 to 1991. He drove a school bus for the Richmond-Burton school district for 18 years. He served on the Richmond Grade School Board for six years in the early 1970s. He served in the U.S. Army as a Cpl in the Korean War. He participated in VetsRoll.org in May 2015. He was a member of Paul C. Hoffman American Legion Post # 253. Charles is survived by three daughters, Ann (Juhani) Puistolahti, of Gurnee, IL; Amy (Rob) Olson, of Harleysville, PA; Irene Olsen, of Fox Lake, IL; a son, Alan (Judy) Olsen, of Grafton, WI; seven grandchildren and a brother Del (Donna) Olsen, of Richmond, IL. Visitation will be from 4:00 to 8:00 pm Friday July 17, 2015 at Ehorn-Adams Funeral Home 10011 Main St, Richmond, IL. Funeral service will be at 10:00 am Saturday July 18, 2015 at Ehorn-Adams Funeral Home, with Rev. Cesar Hernandez officiating. Interment will be in Greenwood Cemetery in Greenwood, IL. In lieu of flowers, memorial contributions may be made to Ringwood United Methodist Church 5214 Barnard Mill Rd Ringwood, IL 60072 or VetsRoll.org. For information, please call 815 678-7311 or visit www.ehornadams.com.

The family of Charles S. Olsen created this Life Tributes page to make it easy to share your memories.

Send flowers to the Olsen family.