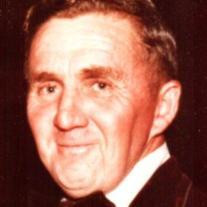 Charles F. "Chuck" Heelein, 85, of Richmond, passed away Thursday, October 11, 2012 at Centegra McHenry Hospital, McHenry, IL. Chuck was born in Woodstock, Illinois on June 18, 1927, a son of the late Joseph and Fredericka (Steinmiller) Heelein. He was a graduate of Richmond High School 1946. He was married to Marilyn Jackson on August 20, 1949, in Richmond and she died Dec. 12, 1992. He was a partner of Heelein & May Contractors from 1950 to 1967, then he owned and operated Heelein and Sons Construction in Richmond from 1967 until retiring in 2005. He was a member of Fox Valley Contractors Assoc in Elgin. He was a member of St. Joseph Catholic Church in Richmond, served as usher for many years, was a member of Holy Name Society and the Catholic Order of Foresters. Charles is survived by two daughters, Margaret (Brett) Wilton of Antioch, IL, Judy Martini of Somerset, KY; two sons Michael (Karen) Heelein of Twin Lakes, WI, Mark (Jennifer) Heelein of Genoa City, WI; a daughter-in-law Val Heelein of Antioch, 11 grandchildren and six great grandchildren. He was preceded by a son Nicholas, a sister Mary Klapperich, four brothers Nicholas, Joseph, John and Frank Heelein. Visitation will from 4 to 8 pm Sunday at Ehorn-Adams Funeral Home 10011 Main St. Richmond. Mass of Resurrection will be at 10:30 am Monday October 15, 2012 at St. Joseph Catholic Church, 10519 Main St. Richmond. Fr. Andrew Lewandowski will officiate. Interment will be in St. Joseph Cemetery in Richmond.

The family of Charles "Chuck" Heelein created this Life Tributes page to make it easy to share your memories.

Send flowers to the Heelein family.