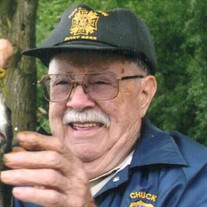 Charles "Chuck" Class, 90, of Spring Grove, IL, passed away Wednesday, April 10, 2019 at Alden -Long Grove Medical Center in Long Grove, IL. He was born in Chicago, IL on March 29, 1929, a son of the late Clarence and Nadine (Touty) Class. He was married to Lorraine "Lolly" Brunmen on Sept. 9, 1950, in Chicago and she passed away Oct. 6, 2018, having residing most of their 68 years in Spring Grove. Chuck learned to fly at the age of 16 and received his private pilot license, becoming the youngest pilot at 17, for a day. On Jan. 9, 1951 he was drafted into the Army, where he served as a sergeant in the 8th Engineers of the 1st Calvary in Korea for two years, 18 months. He served as finance officer (20 years) adjutant and commander of American Legion Post 703 in Fox Lake, joining in 1977. He also served as Commander of VFW Post 9655 for two years. He enjoyed his motorcycle, snowmobiling and fishing. He worked as a floor sander/finisher and ceramic tile setter and in his golden years drove delivery for a dental company. Charles is survived by two daughters, Cathy Filwett of Spring Grove, Denise Rudolph of Wonder Lake, IL; five grandchildren Guy (Annette) Filwett, Troy Filwett, Stephanie Rudolph/Branham, Tonya(Mike) Ziobrowski and Becky Rudolph; four great grandchildren Mila, Natalia and Max Filwett and Charles "CJ" Branham; a brother-in-law Richard (Mary Jeanne) Monhardt, nieces and nephews; a dear friend Ray, plus his Legion and VFW brothers. Memorial visitation will be from 1:00 to 4:00 p.m. Saturday April 27, 2019 with the Celebration of Life service at 5:00 p.m. at Ehorn-Adams Funeral Home, 10011 Main St, Richmond, IL with military honors to follow. Please NO flowers. Memorials may be made to the family, who in turn will donate to a veterans organization in his honor.

The family of Charles "Chuck" Class created this Life Tributes page to make it easy to share your memories.

Send flowers to the Class family.