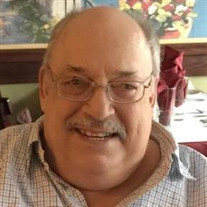 Bruce Leonard Ostrom, 69, of Silver Lake, WI, formerly of Illinois, Colorado, Washington, and Costa Rica, passed away peacefully with his loving sister Laurie, brother-in-law, Ken, and dear friend Mike McGrath by his side on December 20, 2017 at St. Catherine’s Hospital, Pleasant Prairie, WI. He was born December 18, 1948 in Chicago, IL, the son of Leonard and Jean (Zimmerman) Ostrom. Bruce was a salesman throughout his working life. Having a great love of the water, Bruce greatly enjoyed fishing and swimming. Bruce was a friend to many who will miss him dearly. He is survived by his loving mother Jean Ostrom; twin sisters, Laurie (Kenneth) Byrge of St. Charles, IL and Linda (John) Sunnen of Solana Beach, CA; and three nieces and one nephew. He is also survived by his ex-wife Gigi Renner and daughter, Dawn, as well as his second ex-wife, Linda Jeanne Liscum. He was preceded in death by his father, Leonard Julius Ostrom and two brothers, Gregory Ostrom and Jeffry Ostrom. Cremation rites have been accorded and interment private.

The family of Bruce L. Ostrom created this Life Tributes page to make it easy to share your memories.

Send flowers to the Ostrom family.