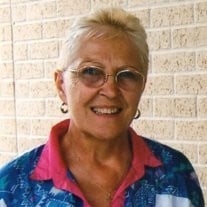 Bebe (Mary) VanLent, 75, of Hebron, passed away in her home on Tuesday, June 4, 2013. Bebe was born March 10, 1938 in Mendota, IL to Harry and Lucille (King) Dhamer. Bebe graduated from St. Edward Catholic High School in Elgin, IL in 1956, and married Walter VanLent in 1957. They lived in Algonquin, IL where they raised their three children. Bebe was fun loving and full of life, taking her children, nieces and nephews on trips to Michigan to visit relatives, trips to the museums in Chicago, and boating. She was a Brownie Leader and Girls Softball coach for her two daughters, as well as working as a Postal Carrier and Realtor. Bebe and Walt moved to Hebron, IL where they established B&W Grocery and Liquor store, and donated the land for the iconic water tower. Bebe was always highly involved in her local community, serving on the Hebron Area Planning and Zoning Commission, with one term as Chair. She donated to the Hebron food pantry and to the Home of the Sparrow, sponsored a Girls Softball team, sponsored a Boys Football team and was a proud member of McHenry County Citizens for Choice. She owned and operated B&W Grocery and Liquor for more than 20 years. Through the store Bebe met and was on a first name basis with almost everyone in town. Bebe was warm and outgoing, she loved to meet and socialize with family, friends, and even strangers. She taught her children, grandchildren, and great-grandchildren how to fish and the value of hard work. She touched so many lives, and she will be sorely missed. She is survived by her three children: Terry (Jeffrey) Kammes, Kim and Greg, as well as seven grandchildren; Jeremiah, Nicholas, Levi, Caleb, Nicole, Matthew and Jacob, three great-grandchildren; Shane, Carter and Trevor, two sisters Mary Lou (Philip) Manning, Frances (Robert) Stuehler and by her former spouse Walter (Midge) VanLent. She was preceded in death by her parents and brother James (Shirley) Dhamer. A celebration of her life will be held at Ehorn-Adams Funeral Home, 10011 Main St., Richmond, IL on Saturday, June 8, 2013. Family and friends will gather beginning at 1:00 pm. At 3:00 pm we will hold a ceremony of celebration of Bebe’s life. For those wishing to send an expression of condolence, the family suggests that donations be made to McHenry County Citizens for Choice or Hebron Food Pantry.

The family of Bebe (Mary) VanLent created this Life Tributes page to make it easy to share your memories.

Send flowers to the VanLent family.