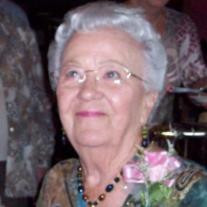 Ardys A. Roepke, 93, of McHenry, IL and Venice, FL died Friday, February 10, 2012 in Venice, FL. Ardys was born September 15, 1918 in Richmond, the daughter of the late Homer and Mabel (Cairns) Clark. She graduated Richmond High School-Class of 1935, was a graduate of the Chicago School of Cosmetology in 1936, co-owned a beauty shop until 1943. She was a secretary, then bank teller, then as a secretary at New Trier High School for eight years until retirement She was married to Lavern E. "Rip" Roepke on June 8, 1940 in Richmond and he died November 7, 1992. Ardys enjoyed golf, traveling and spending winters in her Florida home where she was an associate member of Our Savior Lutheran Church in Nokomis, FL, and earlier years at St. John's Lutheran Church in Wilmette, IL. She was a member of Shepherd of the Hills Lutheran Church in McHenry. Ardys is survived by a son, Robert (Kathy) Roepke of Venice, FL, a daughter, Julie (Jeffrey) Perley of Egg Harbor, WI, four grandchildren Gretchen (James) Palmer, Kerri (Buchanan) Willoughby, Leslee Perley, 1st Lt. Matthew (Alexis) Perley, five great grandchildren Ella Grace, Kacy and Shea Palmer, Paxton Willoughby and Cade Jackson Perley (born Feb. 4, 2012). She was preceded by a son Thomas in 1952 and a brother and sister-in-law George (Ruth) Clark. Visitation will be from 10 am Tuesday February 21, 2012 until the memorial services at 11 am at Shepherd of the Hills Lutheran Church 404 N. Green St, McHenry. Rev. Roger Schneider will officiate. Inurnment will be in Richmond Cemetery in Richmond. In lieu of flowers, memorials to Hospice of Northeastern Illinois 410 S. Hager Av Barrington, IL 60010 or Shepherd of the Hills Lutheran Church 404 N. Green St. McHenry, IL 60050. www.ehornadams.com

The family of Ardys Roepke created this Life Tributes page to make it easy to share your memories.

Send flowers to the Roepke family.