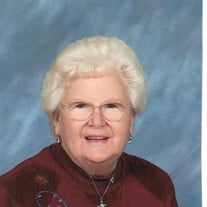 Anna J. "Toddy" Markee, 92, of Hebron, IL, passed away Monday, September 18, 2017 at Alden Terrace, McHenry, IL. She was born in Genoa City, WI on December 12, 1924, daughter of the late John and Clara (Thomsen) Amborn and graduated from Genoa City High School-class of 1942. She was married to Glenn Markee on Oct. 30, 1942, in Woodstock, IL and he passed away Dec. 23, 1979. She was a member of Hebron United Methodist Church in Hebron, IL and served as treasurer for many years and involved in Dorcas Circle and service club. She was employed as head bookkeeper at Vaughn & Bushnell in Hebron, IL., for over 29 years. She was active as a Girl Scout Leader, Lady of the Moose member and after breast surgery in 1978 she was a Volunteer for American Cancer Society and Reach to Recovery. She had a 'hobby' of sending greeting cards to her many relatives and friends and always included a spiritual passage in them. She liked music and always had a "song in her heart". She especially loved God and her family. Anna is survived by a daughter, Barbara Weiberg; three grandchildren and five great grandchildren plus many relatives and friends. A special "thank you" goes to her niece Lynne, who has always been like a daughter. She was preceded in death by three sisters Marie Jepsen, Hilda Harms, Karen Miller and two brothers Jes and John "Manny" Amborn Visitation will be from 9:00 a.m. until the service at 11 a.m. Saturday September 23, 2017 at Ehorn-Adams Funeral Home 10011 Main St. Richmond, IL. Rev. Dr. James Wilson will officiate. Interment will be in Hillside Cemetery in Genoa City, WI. In lieu of flowers, memorial contributions may be made to Hebron United Methodist Church 9811 Main St Hebron, IL 60034.

The family of Anna J. "Toddy" Markee created this Life Tributes page to make it easy to share your memories.

Send flowers to the Markee family.