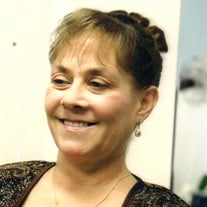 Andrea D. Wooten, 57, of Hebron, IL, passed away Saturday, February 20, 2016 at Rockford Memorial Hospital, Rockford, IL. She was born in Elmhurst, Illinois on January 29, 1959, a daughter of John and Gloria (Anderson) Dreyer. She was a graduate of York High School in Elmhurst in 1977. She was married to Robert A. Wooten on Oct. 13, 1979, in Dennis, MS. After marriage, they moved back to Illinois, living many places before settling in Hebron in 1999. Andrea was a jack of all trades, working in many fields throughout her life. Her greatest passions were being a mother and helping educate children. After staying home to raise her children, she worked in schools for over 10 years. During that time, she was a certified para-professional. Following several health related issues, Andrea stayed home and devoted much of her time getting well and focusing on spending time with her husband and her children. For the last few years, she spent much of her time focused on her granddaughter. The two of them had a very special bond. Andrea is survived by her husband Robert, a daughter, Jennifer (Shawn) Jensen, of Des Moines, IA; two sons David (Kimberly) Wooten, of Ingleside, IL; William Wooten, of Madison, WI; a granddaughter Clara Mae Jensen; her father John Dreyer of Elmhurst; three sisters, Gayle (Stephen) Sears, of Rockford, IL; Wendy Brentner, of Iowa City, IA, Jill (David) Shelby, of West Lafayette, IN; a brother, Dr. Paul (Cheryl) Dreyer, of Orlando, FL, plus 15 nieces and nephews. She was preceded by her mother Gloria. Visitation will be from 4 to 8 p.m. Friday at Ehorn-Adams Funeral Home 10011 Main St, Richmond, IL. Funeral service will be at 11:00 a.m. Saturday February 27,2016 at Ehorn-Adams Funeral Home, Richmond, IL. Interment will be in Linn-Hebron Cemetery in Hebron, IL. In lieu of flowers, memorial contributions may be made to Wounded Warrior Project at https://support.woundedwarriorproject.org/

Andrea D. Wooten, 57, of Hebron, IL, passed away Saturday, February 20, 2016 at Rockford Memorial Hospital, Rockford, IL. She was born in Elmhurst, Illinois on January 29, 1959, a daughter of John and Gloria (Anderson) Dreyer. She was a... View Obituary & Service Information

The family of Andrea D. Wooten created this Life Tributes page to make it easy to share your memories.

Send flowers to the Wooten family.