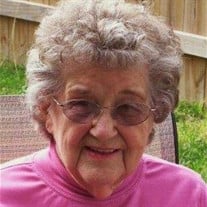 Alice A. Grabbert, 93, of Crystal Lake, IL, formerly Hebron, passed away Monday, February 29, 2016 at Fountains of Crystal Lake in Crystal Lake, IL She was born in Richland Center, WI on February 9, 1923, a daughter of the late Edwin and Freda (McMillin) Berry. She was a graduate of Harvard High School in 1941. She was married to Edward C. Grabbert on August 24, 1941, in Hebron and he died May 9, 1997. She was a member of St. John's Lutheran Church in Hebron, IL. She worked as a painter at Autolite in Woodstock, for over 30 years She was a memberof Hebron Service Club, Hebron Senior Coffee Mates and Harvard Moose. She live a full life and enjoyed traveling to many countries. She lived in Hebron most of her adult life. She was a "winter Texan" and lived in Rockton/Fulton, Texas for over 25 years and had many special friends there. Alice is survived by a daughter, Sandra (Frank) Polizzi, of Crystal Lake, IL; her "grand-dog" Jilly; two sisters, Pauline (Earl) Genskow, of Tama, IA; Pat (Richard) Johnson, of Hebron, IL; two brothers, Garry (Elva) Berry, of Hot Springs, Arkansas; Jon (Janet) Berry, of Belvidere, IL plus many nieces and nephews. She was preceded by three sisters Virginia Berry, Rosalie Recker, Darlene Rathman and two brothers Rollin "Red" Berry and Jessie "Jim" Berry. Visitation will be from 9:00 a.m. Saturday March 5, 2016 until the service at 11:00 a.m. at Ehorn-Adams Funeral Home 9625 Main St, Hebron. Rev. Sarah Wilson will officiate. In lieu of flowers, memorial contributions may be made to St. John's Lutheran Church 9812 St. Albans St. Hebron, IL 60034 or JourneyCare Foundation 405 Lake Zurich Rd Barrington, IL 60010 or or charity of your choice. Interment will be in Linn-Hebron Cemetery in Hebron, IL.

The family of Alice A. Grabbert created this Life Tributes page to make it easy to share your memories.

Send flowers to the Grabbert family.