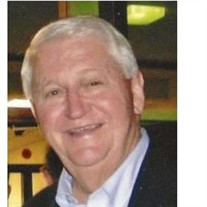 Alan M. Meyer, 81, of Buffalo Grove, IL, passed away Saturday, April 20, 2019 while in the company of family members, at his residence. Alan’s life was filled with many great moments and milestones that left many fond memories of what a good man should be. He was born in Spring Grove, IL on January 2, 1938, a son of the late Anton "Tony" and Hilda (May) Meyer. His youth was spent on the family farm in Spring Grove, IL. When he didn’t have chores to complete he found the time to hone his athletic skills in the games of baseball and basketball at Richmond-Burton High School. After a brief stint as a professional baseball player in the Milwaukee Braves organization, Alan served in the U.S. Marine Corp, followed by a successful career in commercial banking. Following his career in banking and until he retired, Alan was President & CEO of Alan M. Meyer and Associates, a financial advisory firm specializing in mergers and acquisitions. Alan considered marrying Rosemarie “Rosie” Lord, the love of his life, as his greatest accomplishment. The marriage lasted nearly 60 years and led to five sons. Alan was never a spectator in the youthful lives of his sons, spending countless hours coaching baseball and teaching by example what it meant to be a good man. Add to the mix some unforgettable spirited games of “Ogre ball” driveway basketball that would include an occasional neighbor kid willing to take the risk of an Ogre elbow to the ribs, this is still talked about like it was yesterday. Alan was the epitome of what it meant to be a part of your community. Always an approachable and recognizable figure, Alan would embrace all who needed his advice as President of the numerous local banks, including First National Bank of Deerfield and Deerfield State Bank. From small town Illinois to downtown Chicago to down south Florida and back, Alan had a special way of connecting with people through the business of banking. With great pride he would tell you he was “the banker to the astronauts” in his tenure at the local community bank down in Merritt Island, Fla. That’s what you call reaching new heights! Asked what his hobby was and Alan would tell you it was business. True, he loved to do business but he had another hobby too. Alan loved to travel the world with his late bride Rosie. They both enjoyed many a trip with many travel companions that included close family and life-long friends. They traveled the globe to destinations that include China, Cuba, Canada, Hawaii, the Virgin Islands, and many more. The scrap books of photos are overflowing of precious moments and memories of their travels. As fitting as it can be, Alan’s last trip is in progress now to pass through the gates of heaven to be with his bride Rosie of 59 years who predeceased him on March 4, 2019. There he will be reunited with his parents Tony & Hilda and his brother Leroy. Both Alan and Rosie loved dearly all of their grandchildren. The bonds of multiple generations of Meyer family members were always on display when gatherings took place. These are the special moments that make life’s journey complete. We will miss you both so much Alan & Rosie! What an incredible journey you gave us all by being here on God’s green Earth. We love you always Dad and your spirit will live in all of us until we see you again in heaven. ~Your loving family Alan is survived by five sons Keith Meyer, of Shawnee, KS; Brian Meyer, of Alpharetta, GA; Douglas (Karla) Meyer, of Arlington Heights, IL; Steve (Robin) Meyer, of Arlington Heights, IL; Garrett (Lesley Chadwell) Meyer, of Huddleston, VA; grandchildren Stephanie, Brendan and Justin Meyer, Kelsey and Courtney Meyer, Ben and Bella Meyer and Joey Bielik; four sisters, Gladys Mayfield, of Rockford, IL; Betty (Bob) Christensen, of Huntsville, AL; LaVerne (Bob) Miller, of Tavares, FL; Joan (Don) Buchert, of Walworth, WI. He was preceded by a brother Leroy and a brother-in-law Roger Mayfield. Visitation will be Friday 9 a.m. to 11 a.m. at St. Peter Catholic Church, 2118 Main St, Spring Grove, IL, with a Mass of Resurrection at 11:00 a.m. with Rev. Msgr. Martin Heinz, celebrant. Interment will be in St. Peter Cemetery in Spring Grove, IL. For information please call 815 678-7311 or visit www.ehornadams.com.

Alan M. Meyer, 81, of Buffalo Grove, IL, passed away Saturday, April 20, 2019 while in the company of family members, at his residence. Alan&#8217;s life was filled with many great moments and milestones that left many fond memories of what... View Obituary & Service Information

The family of Alan M. Meyer created this Life Tributes page to make it easy to share your memories.

Send flowers to the Meyer family.